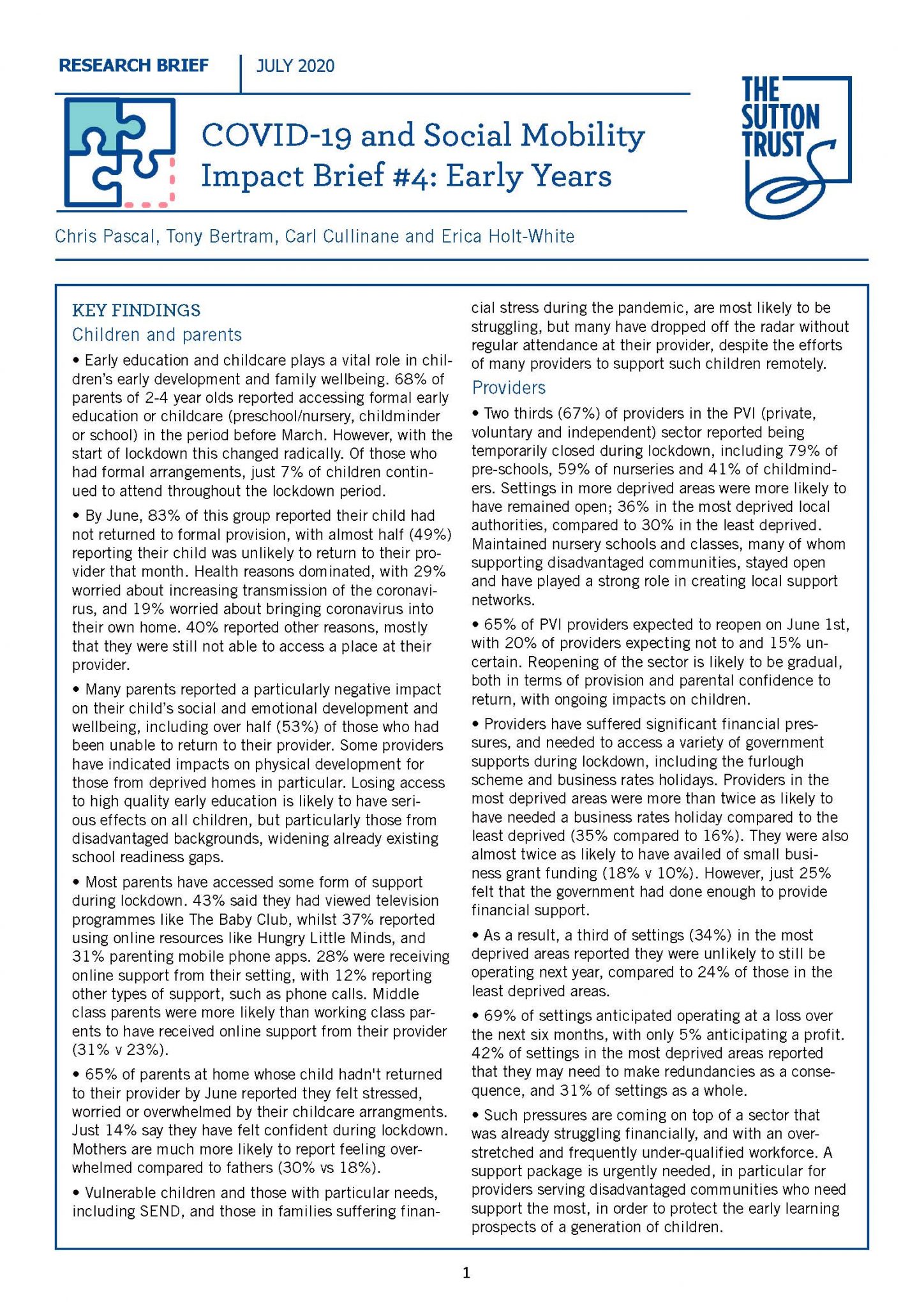 The COVID-19 pandemic has posed enormous challenges to the early years sector, which caters for about 2.1 million children under the age of 5 years. The economic and public health consequences of the crisis are threatening to deepen existing patterns of vulnerability and under-achievement for young children and families, especially those living in poverty and disadvantage. We know that the early years are a crucial stage for social mobility, with the poorest children already 11 months behind their better-off peers before they start school and that attending high-quality early years provision provides a vital opportunity to narrow this gap before children start school.

This report, the fourth in our series of COVID-19 Impact Briefs, authored by Chris Pascal and Tony Bertram of the Centre for Research in Early Childhood, along with Carl Cullinane and Erica Holt-White of the Sutton Trust, looks at how the pandemic is impacting the early years sector, particularly children, parents and providers in disadvantaged communities.

Our companion report, Getting the Balance Right, considers recent government policy on early childhood education and care in England.

A third of early years providers in deprived areas who may have to close within a year.

The proportion of early years providers in deprived areas who are likely to make redundancies.

Two thirds of parents without childcare are feeling stressed, worried or overwhelmed.

• Early education and childcare plays a vital role in children’s early development and family wellbeing. 68% of parents of 2-4 year olds reported accessing formal early education or childcare (preschool/nursery, childminder or school) in the period before March. However, with the start of lockdown this changed radically. Of those who had formal arrangements, just 7% of children continued to attend throughout the lockdown period.

• By June, 83% of this group reported their child had not returned to formal provision, with almost half (49%) reporting their child was unlikely to return to their provider that month. Health reasons dominated, with 29% worried about increasing transmission of the coronavirus, and 19% worried about bringing coronavirus into their own home.

• Many parents reported a particularly negative impact on their child’s social and emotional development and wellbeing, including over half (53%) of those who had been unable to return to their provider. Losing access to high quality early education is likely to widen already existing school readiness gaps.

• Most parents have accessed some form of support during lockdown. 43% said they had viewed television programmes like The Baby Club, whilst 37% reported using online resources like Hungry Little Minds, and 31% parenting apps. Middle class parents were more likely than working class parents to have received online support from their provider (31% v 23%).

• 65% of parents at home whose child hadn’t returned to their provider by June reported they felt stressed, worried or overwhelmed by their childcare arrangements.  Mothers are much more likely to report feeling overwhelmed compared to fathers (30% vs 18%).

• Two thirds (67%) of providers in the PVI (private, voluntary and independent) sector reported being temporarily closed during lockdown, including 79% of pre-schools, 59% of nurseries and 41% of childminders. Settings in more deprived areas were more likely to have remained open; 36% in the most deprived local authorities, compared to 30% in the least deprived.

• Providers have suffered significant financial pressures, and needed to access a variety of government supports during lockdown, including the furlough scheme and business rates holidays. Providers in the most deprived areas were more than twice as likely to have needed a business rates holiday compared to the least deprived (35% compared to 16%). They were also almost twice as likely to have availed of small business grant funding (18% v 10%). However, just 25% felt that the government had done enough to provide financial support.

• As a result, a third of settings (34%) in the most deprived areas reported they were unlikely to still be operating next year, compared to 24% of those in the least deprived areas.

• 69% of settings anticipated operating at a loss over the next six months. 42% of settings in the most deprived areas reported that they may need to make redundancies as a consequence, and 31% of settings as a whole.

• A support package is urgently needed, in particular for providers serving disadvantaged communities who need support the most, in order to protect the early learning prospects of a generation of children.

1. The government should urgently implement a package of support for the early years sector in line with the support offered to schools and which recognises the importance of the early years on child development and long-term life chances. This would equate to around £88m and could be spent on a mix of targeted and universal support, which could include:

• Transition funding to support settings through this particularly difficult period where providers are facing the cost of reopening, but unlikely to reach full capacity, and with the imminent tapering of the furlough scheme.

• For at least the next year, the Early Years Pupil Premium should be increased to a per hour rate equivalent to the primary school Pupil Premium, which better captures the additional needs of this group, and challenges for providers in narrowing gaps in school readiness.

2. Using this extra pupil premium funding, settings, particularly those in deprived areas, should be encouraged to provide more direct support for parents in terms of the home learning environment. While other supports such as apps are welcome, the relationships and trust established through face-to-face support mean that settings themselves are often best placed to support parents who need it, with many settings already increasingly playing this wider role.

3. Eligibility for 30 hours childcare should be extended to all those currently eligible for disadvantaged 2 year old provision, which would include those out of work or on very low incomes. As increasing numbers of parents become unemployed or are working on reduced hours or pay, fewer people will be eligible for the current 30 hours of free childcare entitlement, necessary to help people back into work. This could be funded by restricting eligibility for households with high incomes.

4. This would also need to be accompanied by a long-term commitment to increased levels of funding for these hours to ensure that delivery is viable for providers and quality of early learning provision is paramount.

5. The workforce is crucial in delivering quality provision. More needs to be done to increase the qualifications of staff, as well as providing career pathways to attract talent. A ‘Leadership Quality Fund’, which could be accessed by settings in order to attract, hire and adequately pay qualified staff, or train existing staff, is crucial to levelling up provision.

6. A reinvigorated system of community based family support through children’s centres that provide integrated early education, childcare, health and family support services is needed, especially in the poorest areas.

Early years in crisis: the impact of the pandemic on sector

The impact of the 30 hours free childcare policy on social mobility.