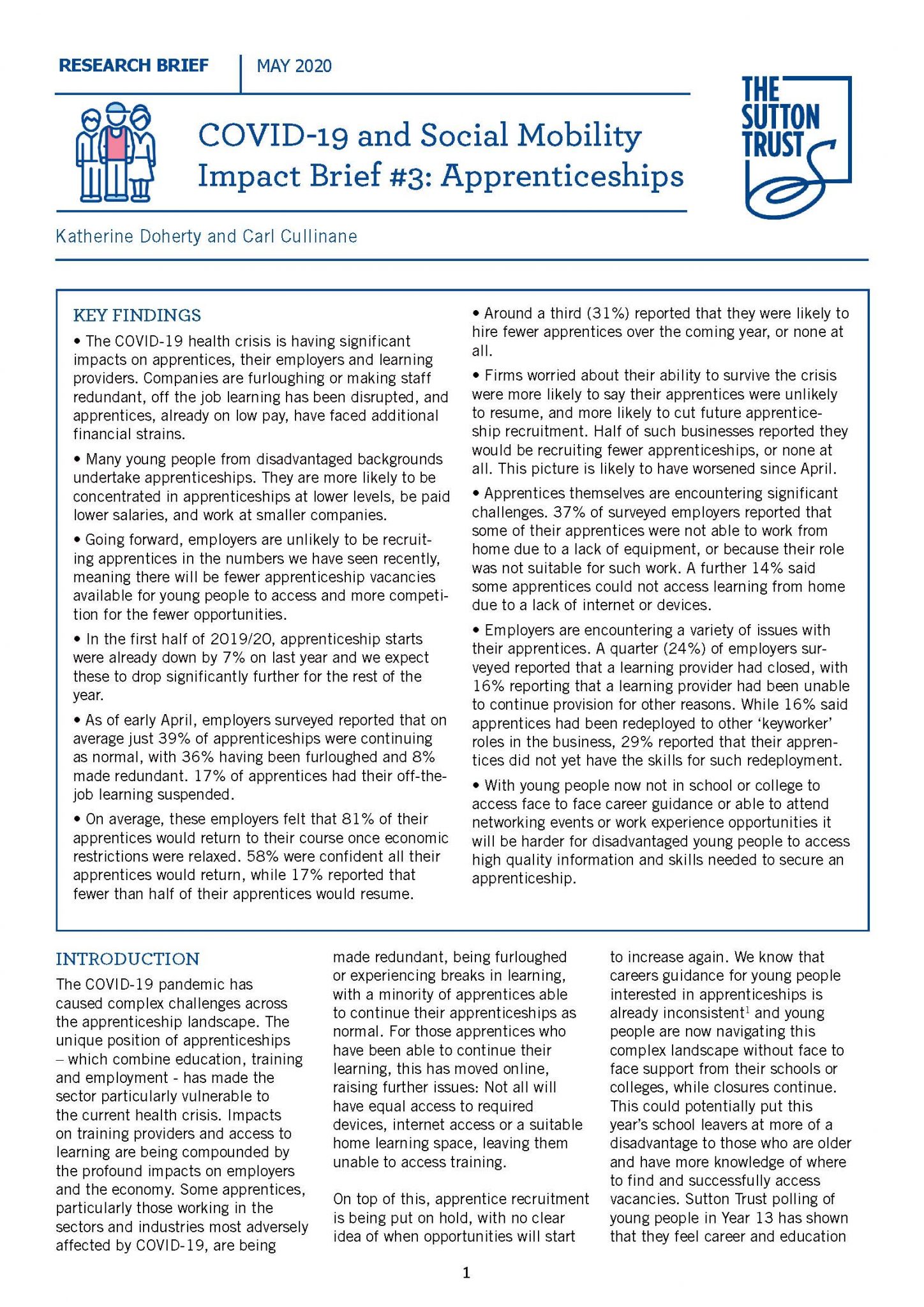 The COVID-19 pandemic has caused complex challenges across the apprenticeship landscape. The unique position of apprenticeships – which combine education, training and employment – has made the sector particularly vulnerable to the current health crisis. Impacts on training providers and access to learning are being compounded by the profound impacts on employers and the economy. Some apprentices, particularly those working in the sectors and industries most adversely affected by COVID-19, are being made redundant, being furloughed or experiencing breaks in learning, with a minority of apprentices able to continue their apprenticeships as normal. For those apprentices who have been able to continue their learning, this has moved online, raising further issues: Not all will have equal access to required devices, internet access or a suitable home learning space, leaving them unable to access training.

This report, the third in our series of COVID-19 Impact Briefs, authored by Katherine Doherty and Carl Cullinane looks at how the pandemic is impacting the apprenticeship sector, in particular those from disadvantaged backgrounds.

Just two in five apprenticeships were continuing as normal in April.

Almost half of apprentices had been furloughed or made redundant.

The percentage of employers who reported some apprentices were unable to work remotely.

• The COVID-19 health crisis is having significant impacts on apprentices, their employers and learning providers. Companies are furloughing or making staff redundant, off the job learning has been disrupted, and apprentices, already on low pay, have faced additional financial strains.

• Many young people from disadvantaged backgrounds undertake apprenticeships. They are more likely to be concentrated in apprenticeships at lower levels, be paid lower salaries and be vulnerable to furloughing and redundancies a result of the health crisis.

• Going forward, employers are unlikely to be recruiting apprentices in the numbers we have seen recently, meaning there will be fewer apprenticeship vacancies available for young people to access and more competition for the fewer opportunities.

• In the first half of 2019/20, apprenticeship starts were already down by 7% on last year and we expect these to drop significantly further for the rest of the year.

• As of early April, employers surveyed reported that on average just 39% of apprenticeships were continuing as normal, with 36% having been furloughed and 8% made redundant. 17% of apprentices had their off-the-job learning suspended.

• Around a third (31%) reported that they were likely to hire fewer apprentices over the coming year, or none at all.

• Employers are encountering a variety of issues with their apprentices. A quarter (24%) of employers surveyed reported that a learning provider had closed, with 16% reporting that a learning provider had been unable to continue provision for other reasons. While 16% said apprentices had been redeployed to other ‘keyworker’ roles in the business, 29% reported that their apprentices did not yet have the skills for such redeployment.

• With young people now not in school or college to access face to face career guidance or able to attend networking events or work experience opportunities it will be harder for disadvantaged young people to access high quality information and skills needed to secure an apprenticeship.

2) The priority for current apprentices should be to continue training where possible, even when on furlough or if redeployed within a company. This can create a virtuous circle for the apprentice, provider and employer.

3) The government should require employers to top up the wages of furloughed apprentices up to the appropriate minimum wage for all usual hours per week, not just those spent training. Additionally, where employers can, they should top up the 80% of furlough funding to 100% for apprentices on low wages, to secure the finances of all the lowest paid apprentices.

4) Information, advice and guidance for young people considering apprenticeships should be protected. While young people are missing out on face-to-face- support and open days, outreach from employers, and support from schools and colleges should continue and be moved online where possible.

5) In order for apprenticeships to deliver on the levelling up agenda as we come out of the coronavirus crisis, social mobility and widening opportunity should be an explicit criterion in a review of the apprenticeships levy. The balance of apprenticeships across age groups, levels, those with equivalent or lower qualifications (ELQ) and existing versus new starters should be examined.

6) With the likelihood of limited funding in the future, it is even more vital that apprenticeship levy funding is focused in the right direction, to ensure both effectiveness and sustainability. The government should consider a maximum salary ceiling for levy-funded apprentices, ensuring that levy funding is not being spent on highly-paid and well-qualified senior staff. Other measures to reduce the strain on levy funding should also be considered, for instance, requiring employers to ‘top up’ levy funding for certain categories of apprentice, or otherwise incentivising apprenticeships most conducive to increasing opportunities for groups who need it most.

Levelling up in lockdown: apprenticeships and Covid-19

Providing context to our Better Apprenticeships Summit, we asked young people and teachers for their views on apprenticeships.