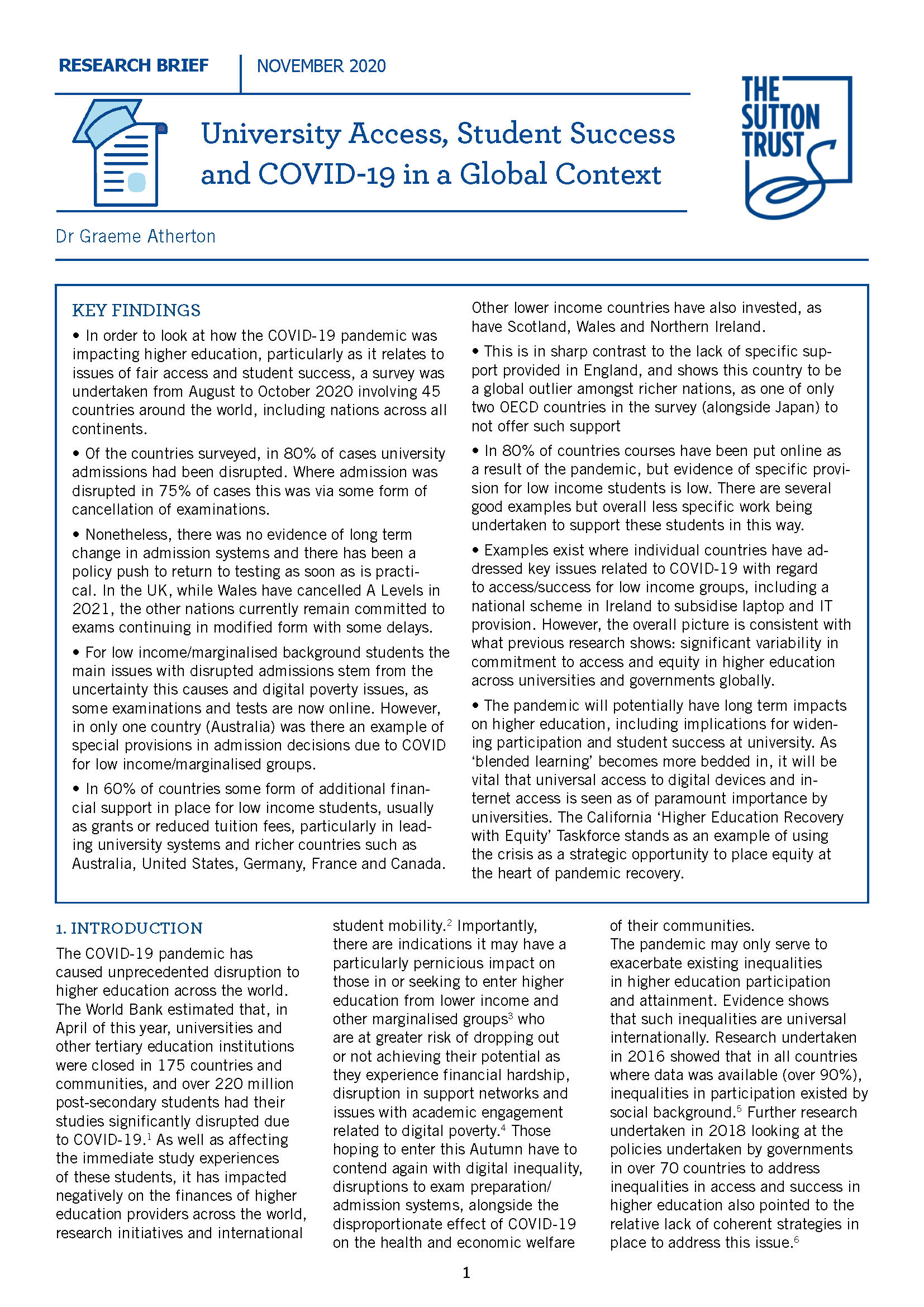 The COVID-19 pandemic has caused unprecedented disruption to higher education across the world. The World Bank estimated that, in April of this year, universities and other tertiary education institutions were closed in 175 countries and communities, and over 220 million post-secondary students had their studies significantly disrupted due to COVID-19.  Importantly, there are indications it may have a particularly pernicious impact on those in or seeking to enter higher education from lower income and other marginalised groups. Those hoping to enter this Autumn have to contend again with digital inequality, disruptions to exam preparation/admission systems, alongside the disproportionate effect of COVID-19 on the health and economic welfare of their communities.

This brief, published alongside a full report into widening access at global institutions, also authored by Graeme Atherton, draws upon a survey of education experts and government representatives which aims to assess in more detail the impact of COVID-19 on access and success in higher education of those from low-income groups and the responses by universities and policymakers.

The percentage of countries surveyed which are providing additional support for low-income students.

The percentage of countries which have experienced disruption due to Covid-19.

The majority of countries have moved courses online.

• Of the 45 countries surveyed, in 80% of cases university admissions had been disrupted. Where admissions were disrupted, in 75% of cases this was via some form of cancellation of examinations.

• Nonetheless, there was no evidence of long term change in admission systems, and there has been a policy push to return to testing as soon as is practical. In the UK, while Wales have cancelled A Levels in 2021, the other nations currently remain committed to exams continuing in modified form with some delays.

• In 60% of countries some form of additional financial support has been put in place for low income students, usually as grants or reduced tuition fees, particularly in leading university systems and richer countries such as Australia, United States, Germany, France and Canada. Other lower income countries have also invested.

• This is in sharp contrast to the lack of specific support provided in England, and shows this country to be a global outlier amongst richer nations, as one of only two OECD countries in the survey to not offer such support. Scotland, Wales and Northern Ireland have all also provided support.

• In 80% of countries courses have been put online as a result of the pandemic, but evidence of specific provision for low income students is low.

• Examples exist where individual countries have addressed key issues related to COVID-19 with regard to access/success for low income groups, including a national scheme in Ireland to subsidise laptop and IT provision. However, the overall picture is consistent with what previous research shows: significant variability in commitment to access and equity in higher education across universities and governments globally.

• The pandemic will potentially have long term impacts on higher education, including implications for widening participation and student success at university. As ‘blended learning’ becomes more bedded in, it will be vital that universal access to digital devices and internet access is seen as of paramount importance by universities.

Additional Resources
Room at the Top: Access and success at leading universities globally

University applicants give their views on admissions reform