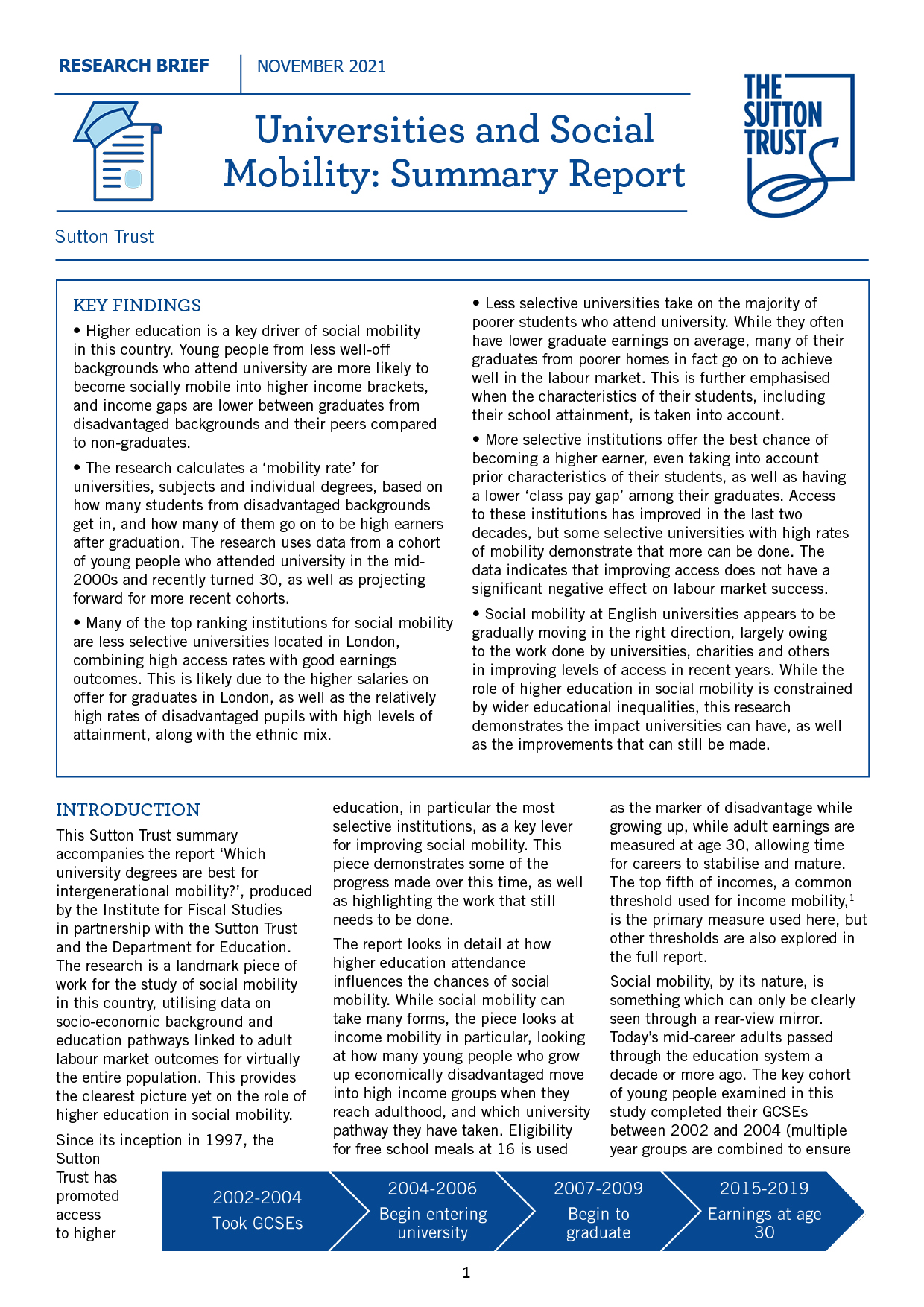 The research is a landmark piece of work for the study of social mobility in this country, utilising data on socio-economic background and education pathways linked to adult labour market outcomes for several entire school cohorts. This provides the clearest picture yet on the role of higher education in social mobility.

The report ‘Which university degrees are best for intergenerational mobility?’, has been produced by the Institute for Fiscal Studies, in partnership with the Sutton Trust and the Department for Education and authored by Jack Britton, Elaine Drayton and Laura van der Erve.

The report looks in detail at how higher education attendance influences the chances of social mobility. While social mobility can take many forms, the piece looks at income mobility in particular, looking at how many young people who grow up economically disadvantaged move into high income groups when they reach adulthood, and which university pathway they have taken.

Our interactive data explorer allows you to examine the rankings in more detail, including universities, subjects and individual degree courses.

How much more likely a low-income student is to become socially mobile if they attend university.

• Higher education is a key driver of social mobility in this country. Young people from less well-off backgrounds who attend university are more likely to become socially mobile into higher income brackets, and income gaps are lower between graduates from disadvantaged backgrounds and their peers compared to non-graduates.

• The research calculates a ‘mobility rate’ for universities, subjects and individual degrees, based on how many students from disadvantaged backgrounds get in, and how many of them go on to be high earners after graduation. The research uses data from a cohort of young people who attended university in the mid-2000s and recently turned 30, as well as projecting forward for more recent cohorts.

• Many of the top ranking institutions for social mobility are less selective universities located in London, combining high access rates with good earnings outcomes. This is likely due to the higher salaries on offer for graduates in London, as well as the relatively high rates of disadvantaged pupils with high levels of attainment, along with the ethnic mix.

• Less selective universities take on the majority of poorer students who attend university. While they often have lower graduate earnings on average, many of their graduates from poorer homes in fact go on to achieve well in the labour market. This is further emphasised when the characteristics of their students, including their school attainment, is taken into account.

• More selective institutions offer the best chance of becoming a higher earner, even taking into account prior characteristics of their students, as well as having a lower ‘class pay gap’ among their graduates. Access to these institutions has improved in the last two decades, but some selective universities with high rates of mobility demonstrate that more can be done.

• Social mobility at English universities appears to be gradually moving in the right direction, largely owing to the work done by universities, charities and others in improving levels of access in recent years. While the role of higher education in social mobility is constrained by wider educational inequalities, this research demonstrates the impact universities can have, as well as the improvements that can still be made.

What are the effects of this year's exam disruption?

This report accompanies the first publication of statistics for higher education destinations for individual schools with sixth forms and...