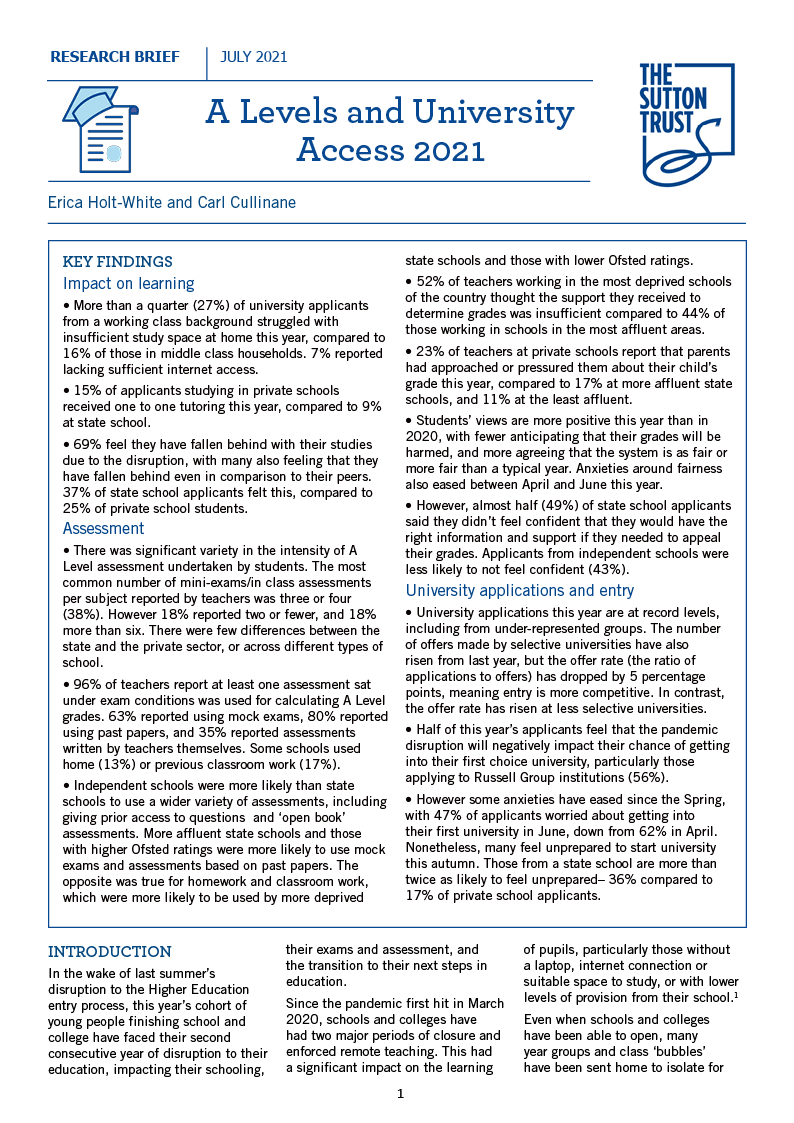 In the wake of last summer’s disruption to the Higher Education entry process, this year’s cohort of young people finishing school and college have faced their second consecutive year of disruption to their education, impacting their schooling, their exams and assessment, and the transition to their next steps in education.

In 2021 pupils’ grades will be determined by teachers, without any adjustment by algorithm, using assessment of content relating to only topics their class had been taught. However, while this approach does account for schools covering varying amounts of the curriculum, it does not take into account individual-level learning loss, an issue which is most likely to impact disadvantaged pupils less able to access home learning.

Two-thirds of students feel they have fallen behind due to the pandemic’s disruption.

One in four private school teachers have been approached by parents over grades.

Half of applicants are concerned about being ready to start university this year.

• More than a quarter (27%) of university applicants from a working class background struggled with insufficient study space at home this year, compared to 16% of those in middle class households. 7% reported lacking sufficient internet access.

• 15% of applicants studying in private schools received one to one tutoring this year, compared to 9% at state school.

• There was significant variety in the intensity of A Level assessment undertaken by students. The most common number of mini-exams/in class assessments per subject reported by teachers was three or four (38%). However 18% reported two or fewer, and 18% more than six. There were few differences between the state and the private sector, or across different types of school.

• 96% of teachers report at least one assessment sat under exam conditions was used for calculating A Level grades. 63% reported using mock exams, 80% reported using past papers, and 35% reported assessments written by teachers themselves. Some schools used home (13%) or previous classroom work (17%).

• 52% of teachers working in the most deprived schools of the country thought the support they received to determine grades was insufficient compared to 44% of those working in schools in the most affluent areas.

• 23% of teachers at private schools report that parents had approached or pressured them about their child’s grade this year, compared to 17% at more affluent state schools, and 11% at the least affluent.

• Students’ views are more positive this year than in 2020, with fewer anticipating that their grades will be harmed, and more agreeing that the system is as fair or more fair than a typical year. Anxieties around fairness also eased between April and June this year.

• However, almost half (49%) of state school applicants said they didn’t feel confident that they would have the right information and support if they needed to appeal their grades. Applicants from independent schools were less likely to not feel confident (43%).

• University applications this year are at record levels, including from under-represented groups. The number of offers made by selective universities have also risen from last year, but the offer rate (the ratio of applications to offers) has dropped by 5 percentage points, meaning entry is more competitive. In contrast, the offer rate has risen at less selective universities.

• Half of this year’s applicants feel that the pandemic disruption will negatively impact their chance of getting into their first choice university, particularly those applying to Russell Group institutions (56%).

• However some anxieties have eased since the Spring, with 47% of applicants worried about getting into their first university in June, down from 62% in April. Nonetheless, many feel unprepared to start university this autumn. Those from a state school are more than twice as likely to feel unprepared– 36% compared to 17% of private school applicants.

• Applicants from disadvantaged backgrounds who have narrowly missed their offer grades should be given additional consideration in the admissions process. Universities should strongly consider that young people, particularly those from disadvantaged backgrounds, have faced additional challenges in their learning this year, which may not have been taken into account in their grades. It is more vital than ever to take such factors into account and recognise that grades may not reflect a young person’s full potential. Widening participation should be a key factor taken into account when universities are giving discretionary acceptances to those who have missed their offers.

• Universities should provide additional wellbeing supports for the incoming cohort. This autumn’s university entrants have been through an acutely difficult period. They are likely to have additional need of support for their wellbeing and mental health as they transition to life in higher education. This could also include stronger support around developing friendships, connections and taking part in university social life. Strong communication is important to set expectations on the university environment and blended learning, particularly if some restrictions will continue.

• Universities should identify key gaps in learning at an early stage in the first term, and provide support if necessary. Given the amount of schooling missed, there are likely to be knowledge and skills gaps among this year’s entry cohort. The importance of such gaps will differ by subject studied, but plans should be put in place to support students who may need to develop in key areas necessary to succeed in their course.

• It is more important than ever for schools to provide as much support to students as possible around results day and during the clearing period, which could be done remotely if necessary. Students who may be first in family to attend university, or those from disadvantaged backgrounds, may need particular support as they may lack the support from home and through networks to navigate what could be a complex and stressful period, compounded by the impact of the pandemic.

• Pupil premium and recovery premium funding, as well as National Tutoring Programme provision, should be extended to 16-19 year olds in education and training. Given the events of the pandemic, it is more important than ever that targeted support for disadvantaged learners should not end at 16.

• Data on this year’s GCSE and A Level results should be made available to researchers at an early stage as possible, in order to understand patterns in this year’s results. Delays with the release of 2020 data have hampered our understanding of last year’s process, with knock on effects for this year.

• There must be a long-term plan for assessment in 2022 and beyond. After two years of cancelled exams, lost learning, and substantial grade inflation, transitioning back to the ‘pre-pandemic’ status quo will be hugely challenging. Any return to pre-pandemic grade distributions should be done gradually, in order to avoid disadvantaging any one cohort unduly.

We look at the impact of Covid as students sit their first exams in three years.

The clearest picture yet of universities and social mobility.