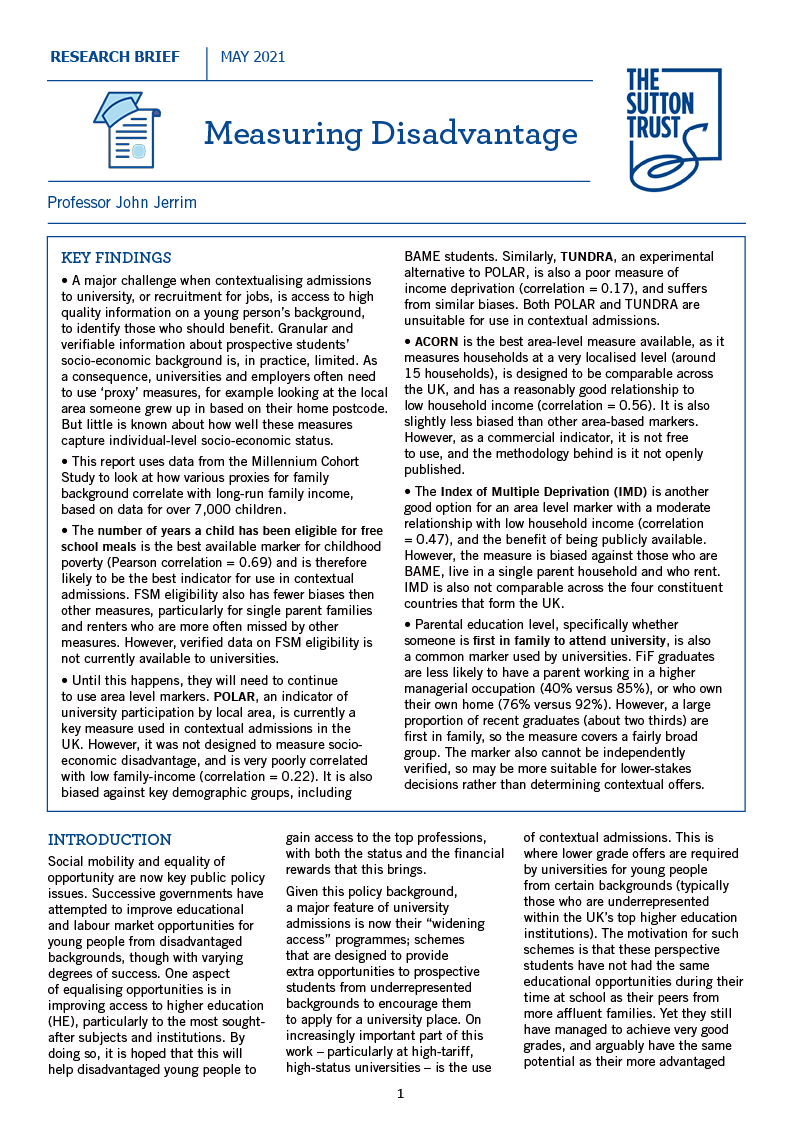 A major challenge when contextualising admissions to university, or recruitment for jobs, is access to high quality information on a young person’s background, to identify those who should benefit. Granular and verifiable information about prospective students’ socio-economic background is, in practice, limited. As a consequence, universities and employers often need to use ‘proxy’ measures, for example looking at the local area someone grew up in based on their home postcode. But little is known about how well these measures capture individual-level socio-economic status.

This report uses data from the Millennium Cohort Study to look at how various proxies for family background correlate with long-run family income, based on data for over 7,000 children.

1. To improve targeting to contextual admissions and widening access schemes, universities and employers need further individual data about the socio-economic background of applicants, in particular Free School Meal eligibility. The creation of a “household-income” database, as suggested by the Russell Group, would be beneficial, but is likely to be difficult to implement. As it is already collected in official datasets, we suggest that information on the proportion of time young people have been FSM-eligible throughout their time at school would be a valuable alternative.

2. There should be greater transparency and consistency from universities and employers when communicating how contextual data is used. If they are to take advantage of access measures, it is crucial that applicants are aware of if and how they may benefit from contextualisation. Universities and employers should publicise the criteria, including the measures used, clearly on their websites, along with how and when they are taken into account. The current situation – where different organisations use different indicators in different ways while not being transparent in their use – can lead to confusion.

3. Universities and employers should prioritise use of the most robust measures for contextualised admissions and recruitment. Where free school meals eligibility is not available, priority should be given to ACORN, the best area-level measure, followed by the Index of Multiple Deprivation (IMD). If a basket of measures is used, these most robust measures should be weighted most strongly.

4. The POLAR and TUNDRA measures should not be used in contextual admissions for individual students. While intended as a measure of HE under-representation, rather than socio-economic disadvantage, it can have a counter-productive impact on accurately identifying those suffering from socio-economic and educational disadvantage, and its use by universities in their widening access schemes, or as part of contextual admissions should be avoided.

5. The Office for Students should review the role of POLAR and the inclusion of specific measures of socio-economic disadvantage in advance of the next round of Access and Participation Plans. Despite the stated intentions of the OfS, the current emphasis on POLAR-based targets for widening participation incentivises a narrow focus on this measure by universities. When developing the next round of APP’s, the OfS should consider explicitly including a specific measure of socio-economic disadvantage in targets alongside or instead of POLAR. Free School Meal eligibility, as the basis for the official government definition of disadvantage in schools, would be the natural candidate and would enable a more joined-up national policy approach across schools and HE.

Helping pupils in England catch up on lost learning will cost £13.5bn – report (Rachel Hall, The Guardian)Universities reject plan for pupils to apply after results (Nicola Woolcock, The Times)Half of students rated as ‘disadvantaged’ not from low-income background – study (Eleanor Busby, PA)Almost half of university students flagged as 'disadvantaged' not from poor families (cAMILLA tURNER, tHE tELEGRAPH)

We look at the impact of Covid as students sit their first exams in three years.

The clearest picture yet of universities and social mobility.