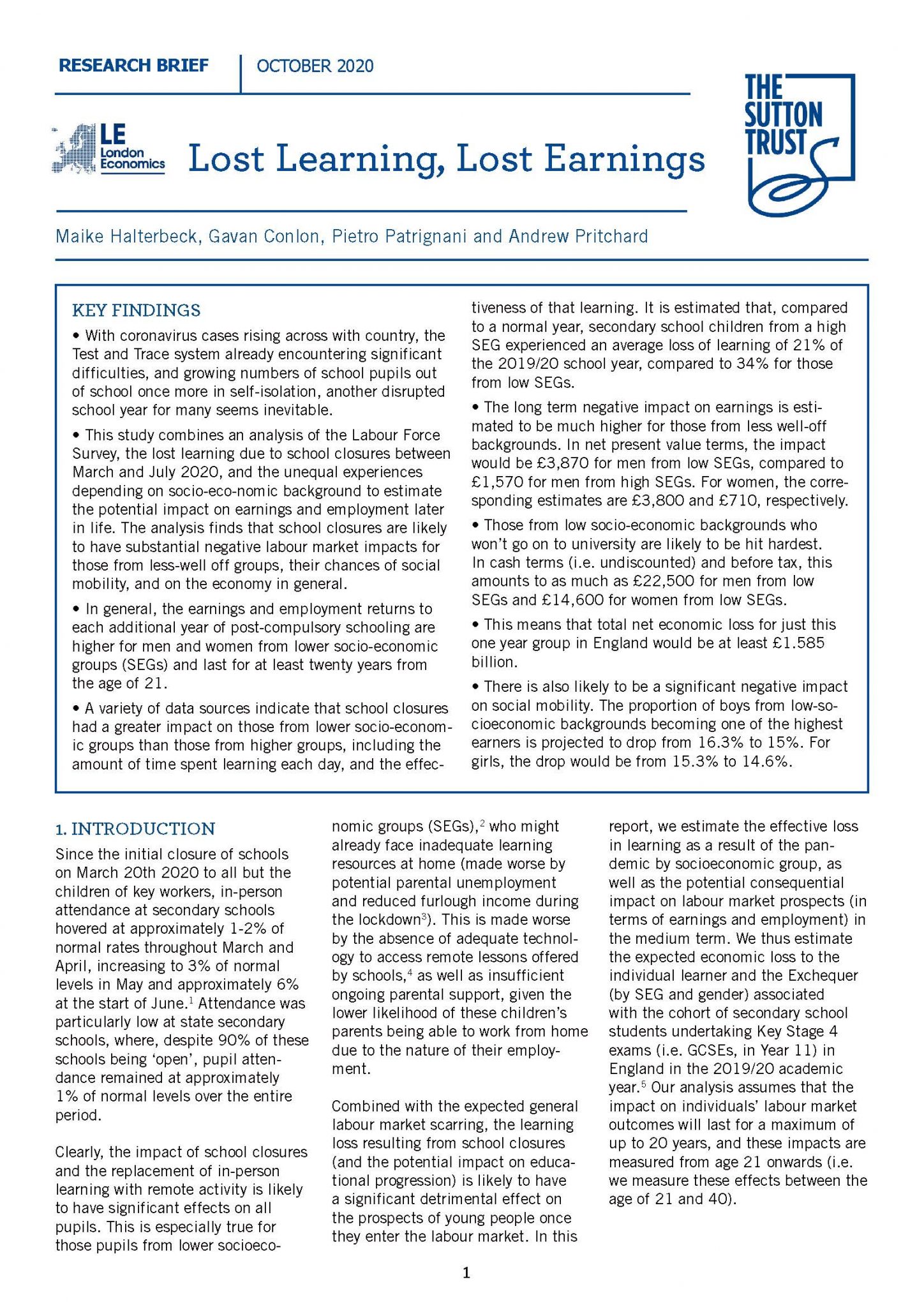 The amount of learning lost for students from lower-income backgrounds.

The projected loss in earnings for men from lower-income backgrounds as a result of school closures.

The total net loss for just one year group in England due to school closures.

• This study combines an analysis of the Labour Force Survey, the lost learning due to school closures between March and July 2020, and the unequal experiences depending on socio-economic background to estimate the potential impact on earnings and employment later in life. The analysis finds that school closures are likely to have substantial negative labour market impacts for those from less-well off groups, their chances of social mobility, and on the economy in general.

• In general, the earnings and employment returns to each additional year of post-compulsory schooling are higher for men and women from lower socio-economic groups (SEGs) and last for at least twenty years from the age of 21.

• A variety of data sources indicate that school closures had a greater impact on those from lower socio-economic groups than those from higher groups, including the amount of time spent learning each day, and the effectiveness of that learning. It is estimated that, compared to a normal year, secondary school children from a high SEG experienced an average loss of learning of 21% of the 2019/20 school year, compared to 34% for those from low SEGs.

• The long term negative impact on earnings is estimated to be much higher for those from less well-off backgrounds. In net present value terms, the impact would be £3,870 for men from low SEGs, compared to £1,570 for men from high SEGs. For women, the corresponding estimates are £3,800 and £710, respectively.

• Those from low socio-economic backgrounds who won’t go on to university are likely to be hit hardest. In cash terms (i.e. undiscounted) and before tax, this amounts to as much as £22,500 for men from low SEGs and £14,600 for women from low SEGs.

• This means that total net economic loss for just this one year group in England would be at least £1.585 billion.

• There is also likely to be a significant negative impact on social mobility. The proportion of boys from low-socioeconomic backgrounds becoming one of the highest earners is projected to drop from 16.3% to 15%. For girls, the drop would be from 15.3% to 14.6%.

How are parents affected by the school closures?