December’s dismantling of the red wall was a poisoned chalice for the Tories. For while on the one hand delivering the party’s biggest majority since 1987, it will also force them to change how they govern. For the Conservatives now represent a socio-economically wider range of constituencies than ever before – and in order to keep them at the next election, they will have to implement policies whose benefits cut across class divides.

Boris Johnson has already made positive noises about doing so. His manifesto committed to “levelling up” opportunities across the country, a euphemism for social mobility. Once he re-entered Number 10, he promised to appoint a “cabinet for modern Britain”.

Johnson is right to emphasise the importance of who gets a seat at the top table of government. Those “in the room” make decisions that affect all of us, and if those people come from homogenous backgrounds, they will necessarily be less capable of making policy that works for the entire country.

This makes it all the more disappointing that last week, the prime minister broke his promise.

Our analysis shows that almost two-thirds (65%) of Johnson’s reshuffled cabinet were educated at an independent school, a proportion nine times greater than the general population, and even greater than the parliamentary Conservative party average of 45%. 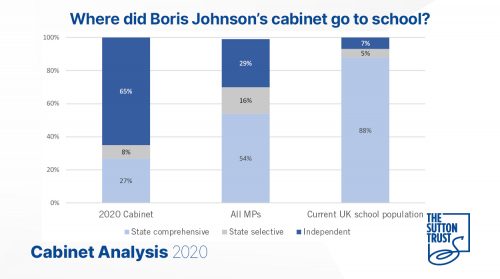 Furthermore, half of the new cabinet attended Oxford or Cambridge. This underlines how much these elite universities remain pathways to the top of our society, and how important it therefore is to widen access to them – which is exactly what the Sutton Trust has done for over 35,000 children. It underlines how important it is that Oxbridge doesn’t become the only viable route to power, how necessary to invest in apprenticeships and further education.

There are some silver linings. For while this new cabinet has bucked a decades-long downward trend in privately-educated cabinet ministers, it is likely that this will be a blip. Our analysis of the educational backgrounds of the newly-elected MPs found that the new Conservatives – many who represent the traditional Labour heartlands in the north – are more likely to have been to comprehensive schools than returning Conservatives. The pool of comprehensive-educated ministers is gradually widening.

Nevertheless, access to enter the higher echelons of our society remains uneven. There are many ways Boris Johnson must address this, from high-quality early years education to tackling financial barriers into work. In several industries – not least of all politics – unpaid internships are the norm, shutting out the majority of people who cannot afford to work for free. Indeed, the Sutton Trust found recently that almost a third of Westminster staffers have worked unpaid for a member of parliament. Tackling social segregation in schools through fairer admissions practices, as well as opening up private schools to merit, not just money, will also prove crucial if Britain is to “level up” in the way Johnson intends.

The Sutton Trust tracks politicians’ educational backgrounds for a reason. The makeup of the Commons and the cabinet sends a message about how open the top jobs are to people from all backgrounds – jobs that impact all our lives, jobs we should therefore want the brightest and best from all walks of life to fill. In the short term, therefore, Johnson ought to diversify the composition of his cabinet. Yet in the long-term term, he should pursue policies that open up opportunities in our country – as doing so will ensure that all future cabinets will necessarily be representative of the country they govern.

As young people face a difficult job market, tackling unpaid internships will be more important than ever

Supporting a new private member's bill due to be read in parliament today.