Back on track? What we know about the return of exams post pandemic

Results day is fast approaching for students who sat A levels and GCSEs this summer – the first after the return of exams post pandemic.

Earlier in the summer, we highlighted how the pandemic impacted education for these year groups, with year 13 students sitting their first formal exams after their GCSEs were cancelled back in 2020, and both year groups having faced considerable disruption.

We also highlighted early warning signs that there may be fewer places available at university this year, particularly at the most competitive institutions and courses.

Now, in our research briefing released today, we have been able to dig deeper into the pandemic’s continued impact on students sitting exams this year, looking at the scale of ongoing disruption and the views of both students and teachers on the mitigations in place.

The continued impact of the pandemic

Our briefing looks at results from polling of 4,089 teachers (either teaching A levels, GCSEs or in their school’s senior leadership team), as well as 434 students who have applied to university this year.

We found many year 13 students missed a considerable amount of learning time over the past academic year. Over a third (34%) of this year’s university applicants have missed 11 or more days of school or college over the last academic year due to covid related disruption, with 21% missing more than 20 days (shown in Figure 1 below).

Figure 1: Days of school or college missed due to covid related disruption during the 2021-2022 academic year 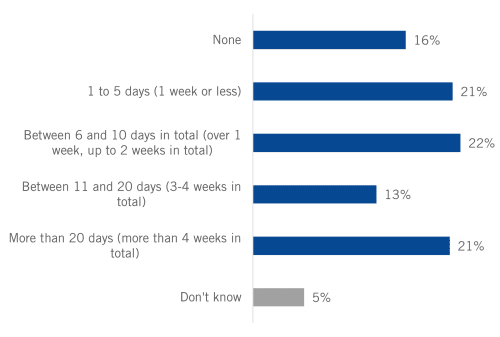 Looking at the catch-up provision offered to year 13s this year, 74% of state school applicants said they were offered at least one of the catch up activities we listed (which included additional in-person support, online support and weekend classes outside of the usual school timetable), but a smaller proportion, 56%, had actually taken up at least one. 36% reported being offered some type of tutoring (either one to one or small group), and 19% reported they had taken part.

62% of this year’s applicants felt they had fallen behind their studies compared to where they would have been without the disruption of the pandemic, only slightly lower than last year, when 69% said the same. This figure was higher for students in state (64%) than in private schools (51%).

Teachers are worried too, with nearly three quarters (72%) believing the attainment gap between the richest and poorest students in their school will have widen when this year’s grades come in.

Nearly half (45%) of the teachers involved with exams this year thought the exam mitigations in place (such as advance information on the topics featured in exams) did not go far enough to account for the pandemic’s disruption. This was 46% for those working in state schools, compared to 38% in independent schools.

The views of students were similar, with only 52% saying the arrangements for exams this year had fairly taken into account the impact of the pandemic on students’ learning.

As we approach results day and final decision time on university places, it is understandably a stressful period for many students.

Indeed, as seen in Figure 2 below, 64% of applicants said they were worried about their grades, with just over 1 in 4 (27%) saying they were very worried. This proportion is 8 percentage points higher than the 58% of students who said the same last year.

Figure 2: Whether applicants were concerned over particular issues, by socio-economic group 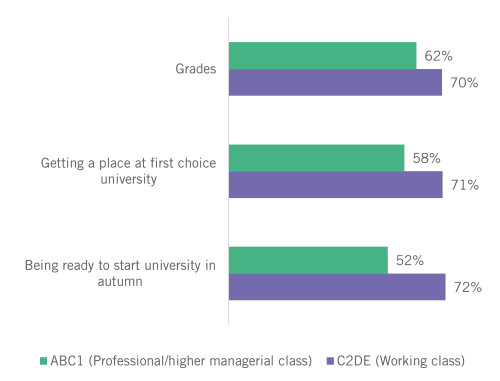 60% of students polled are also worried about getting a place at their first-choice university (13 percentage points higher than the 47% who said the same last year) with just over half (56%) worried about being ready to start university in the autumn.

Taking these findings into account, it seems likely we could see another stressful results day.

What this means for universities and employers

Whilst a return to relative normality has allowed students to sit exams again this year, the effects of the pandemic on their education have remained. Mitigations in place this year for exams have not been able to fully reflect individual-level learning loss.

After results day passes, and thousands of students arrive on university campuses, institutions should also look to provide additional wellbeing support for the incoming cohort. Many students are worried about starting university this year, and they are likely to need additional support for their wellbeing and mental health as they transition to life in higher education.

Key gaps in learning should also be identified at an early stage, ideally in the first term, to ensure support can also be given to students who have missed out on learning in key areas necessary to succeed in their course.

Whatever happens on results day, it will mark a key stage in many young people’s lives as they move on to pastures new. We must ensure that no young person is locked out of their next steps because of the unequal impacts of the pandemic, and ensure all have every chance to fulfil their potential.

Our polling on how the cost of living crisis is impacting students.