A look at the apprenticeship landscape

Our Apprenticeships Manager, Katherine Doherty, reflects on last week’s National Apprenticeship Week and looks at the current landscape of the sector. What are the challenges facing apprenticeships at the moment?

Apprentices are undoubtedly going to play a crucial role in the UK’s economic recovery post-coronavirus, so the theme of this year’s National Apprenticeship Week ‘Build the Future’ seemed fitting. Last week saw extensive celebration (mostly virtual) across the whole apprenticeship community, highlighting the ongoing work that is being undertaken to increase opportunity and widen access to apprenticeships.

The graph below shows how the numbers of apprenticeship starts have evolved in recent years, broken down by level. Since the substantial drop in numbers when the wider reforms were introduced, it is important to note the decline of intermediate apprenticeships which is in stark contrast to the accelerated growth in higher apprenticeships. Overall, numbers remain much lower.

The 2019-2020 numbers start to reflect the impact of the Covid-19 restrictions that came into play on the 23rd March, but even before the pandemic apprenticeship starts were down 7% on the previous year. The pandemic has only exacerbated the decline in starts, with a 46% drop between 23 March to 31 July 2020. 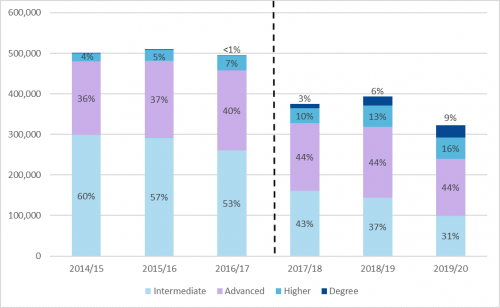 It is often assumed that apprenticeships don’t have access problems because they are undertaken by a disproportionate number of those from less well-off backgrounds. However, this obscures the fact that there are substantial differences in the pattern of socio-economic background at different apprenticeship levels. Just 13% of degree apprenticeships come from neighbourhoods in the bottom fifth of deprivation, with over twice as many (27%) coming from the most advantaged areas. The Social Mobility Commission found that apprenticeship starts for those from disadvantaged backgrounds dropped by around 36% between 2015/16 and 2017/18.

As the apprenticeship system is employer–led it completely relies on employers offering apprenticeships, which in a pandemic has been tough. If you look at the apprenticeship vacancies advertised on the ‘Find An Apprenticeship’ website, it gives a rough idea of the number of opportunities available. As you can see on the below graph, vacancies across 2019/20 were generally lower than the previous year, with the exception of February. Unsurprisingly, vacancies dropped significantly when restrictions were implemented towards the end of March, with April, May and June experiencing the highest drops. From July onwards, although vacancy numbers were lower than the previous year by between 12–34%, they saw less significant disparities, and in December 2020 vacancies were actually 7% above December 2019 vacancies.

The financial initiatives introduced to encourage employers to hire new apprentices do not seem to go far enough to reverse the sharp decline in apprenticeship opportunities. Financial incentives will continue to be available for employers taking on new apprentices until the end of March, but by the 8th January 2021 a total of only 18,670 starts were planned under the apprenticeship scheme. This is nowhere near the 100,000 the Plan for Jobs had budgeted for, although it did state final costs would depend on final numbers hired and may be lower. It is now more critical than ever that apprenticeship opportunities remain in place, for young people particularly, to access. Therefore, at the very least the financial incentives should be extended past its current expiry of March to allow employers more time to use the incentive and offer more apprenticeships to young people. It may be also worth considering whether the incentive needs to be more generous in order to kickstart supply from employers.

It is encouraging to see that employers know that having the opportunities is only the first step and that this is not enough in itself to tackle the widening access gap. Employers are designing their own collaborative ways of ensuring apprenticeships are accessible to all. Last week during National Apprenticeship Week, Co-op announced they were pledging £500,000 to kickstart a fund to improve opportunities for individuals, including BAME and low socio-economic groups, by transferring levy money from large employers to small businesses, which is significant step in the right direction.

An issue we highlighted in our Covid impact brief was the disappearance of face-to-face information and guidance across schools or colleges. We know that careers information can be fragmented and complex to navigate especially around apprenticeships, which was one of the key reasons we launched our Apprenticeship Summer School and why we welcomed the vision to improve careers advice and enforce the Baker Clause outlined in the recent Skills for Jobs white paper. As apprenticeships are increasingly being considered by young people as their chosen route, now is the time to ensure that they really are accessible to young people from low socio-economic backgrounds, to tackle the inequality gap before it grows even further. We know that there are other barriers alongside IAG to young people, particularly those from less advantaged backgrounds, in accessing top apprenticeships, so it is crucial that a culture of widening participation is cultivated. This can be done in a number of ways, such as using contextual admissions or allowing a portion of levy money to be spent on access activities.

The Recent Evolution of Apprenticeships

Analysis from the authors of our recent research into apprenticeships.

Decline in young people from low-income backgrounds taking up apprenticeships

Our latest research looks at apprenticeships take-up since 2015.