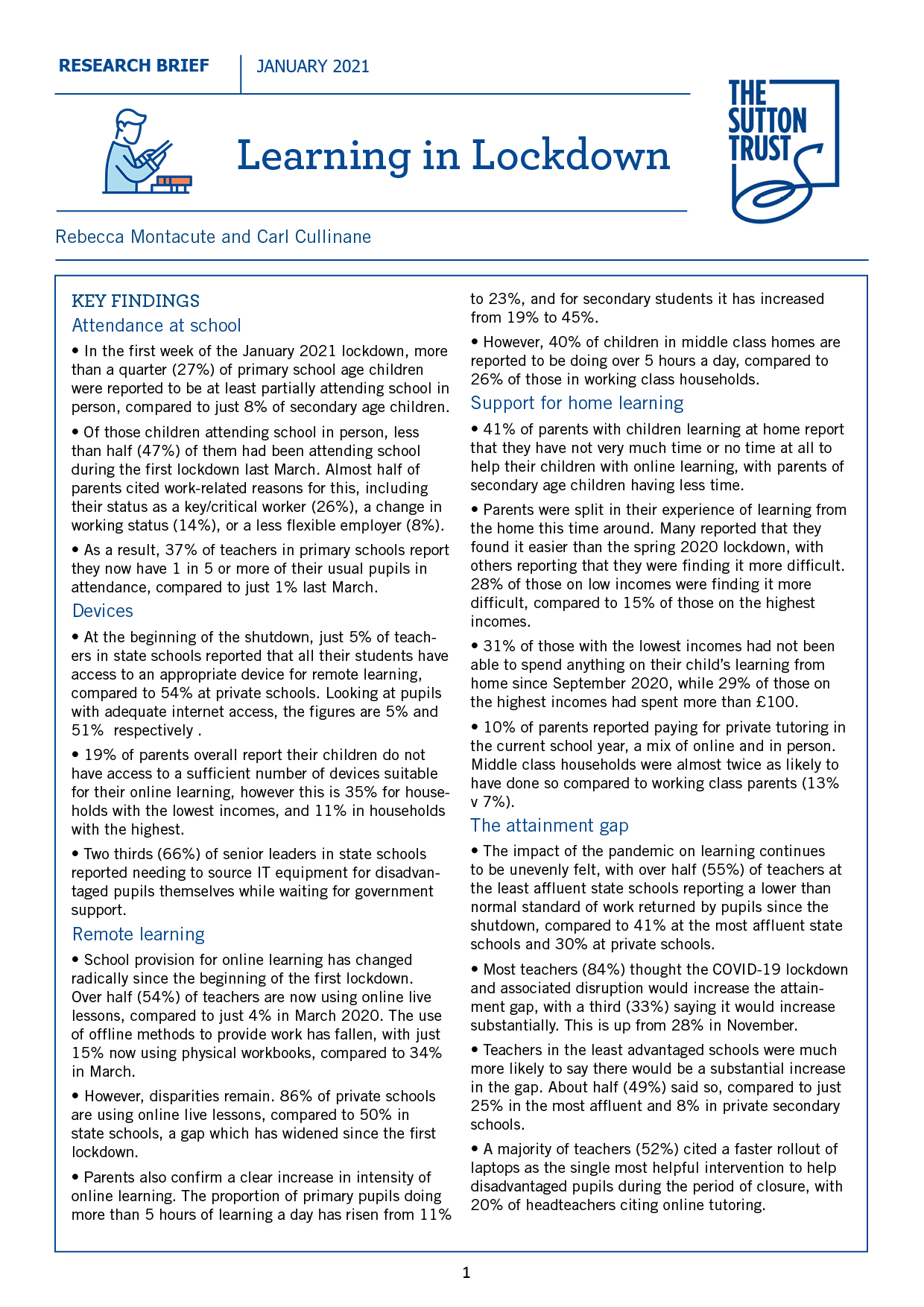 For the second time in less than a year, the COVID-19 pandemic has forced schools to close for most children, with the majority of children once again learning remotely.

During the first lockdown, research from the Sutton Trust found that children’s experiences of remote learning varied substantially across different socio-economic backgrounds. There is a risk that years of work to reduce the attainment gap and tackle social mobility could be undone in just a few months.

This research brief, authored by Rebecca Montacute and Carl Cullinane, looks at the situation for pupils at the beginning of the second period of school closures. Survey data from Teacher Tapp and YouGov give an up to date picture of how teaching is being delivered remotely, as well as access to resources, and barriers faced while learning at home. The report also looks at how the impacts of the pandemic on education and social mobility can be minimised.

Just 5% of state school teachers say all their students have adequate access to devices for remote learning.

Parents on lower incomes are twice as likely as richer parents to find home schooling harder now than in March.

Most teachers think the lockdown and associated disruption will increase the attainment gap in their school.

Attendance at school
• In the first week of the January 2021 lockdown, more than a quarter (27%) of primary school age children were reported to be at least partially attending school in person, compared to just 8% of secondary age children.

• As a result, 37% of teachers in primary schools report they now have 1 in 5 or more of their usual pupils in attendance, compared to just 1% last March.

Devices
• At the beginning of the shutdown, just 5% of teachers in state schools reported that all their students have access to an appropriate device for remote learning, compared to 54% at private schools.

Remote learning
• School provision for online learning has changed radically since the beginning of the first lockdown. Over half (54%) of teachers are now using online live lessons, compared to just 4% in March 2020. The use of offline methods to provide work has fallen, with just 15% now using physical workbooks, compared to 34% in March.

• However, disparities remain. 86% of private schools are using online live lessons, compared to 50% in state schools, a gap which has widened since the first lockdown.

• The proportion of primary pupils doing more than 5 hours of learning a day has risen from 11% to 23%, and for secondary students it has increased from 19% to 45%.

• However, 40% of children in middle class homes are reported to be doing over 5 hours a day, compared to 26% of those in working class households.

Support for home learning
• 41% of parents with children learning at home report that they have not very much time or no time at all to help their children with online learning.

• Parents were split in their experience of learning from the home this time around. 28% of those on low incomes were finding it more difficult, compared to 15% of those on the highest incomes.

• 31% of those with the lowest incomes had not been able to spend anything on their child’s learning from home since September 2020, while 29% of those on the highest incomes had spent more than £100.

• Most teachers (84%) thought the COVID-19 lockdown and associated disruption would increase the attainment gap, with a third (33%) saying it would increase substantially. This is up from 28% in November.

• Teachers in the least advantaged schools were much more likely to say there would be a substantial increase in the gap.

• A majority of teachers (52%) cited a faster rollout of laptops as the single most helpful intervention to help disadvantaged pupils during the period of closure, with 20% of headteachers citing online tutoring.

1. As a matter of urgency, every pupil should have access to a device and internet access for remote learning. Laptops, internet dongles and other learning devices should continue to be rolled out at speed through the government programme.

2. Educational websites and online learning services should be ‘zero rated’ by internet data providers. While there are technical obstacles to this, telecoms companies should continue to work with the sector to find solutions to excluding online learning from mobile data allowances.

3. Schools should receive a £750m ‘boost’ for their disadvantaged pupils via the pupil premium, as part of a new package of catch up funding. The cumulative impact of the new school closures on top of 9 months of disrupted schooling on learning and the attainment gap is likely to be of an unprecedented scale. It is vital that schools are resourced to help those who have suffered the most ‘bounce back’ once schools are open again. A £750m one-off pupil premium boost would give schools £400 additional per pupil to spend on catch up as they see fit, which could pay for a block of high quality paired tutoring, and other effective interventions.

4. The pupil premium should, at the very least, be protected in per head terms from 2022/23. While it is welcome that the Pupil Premium has been protected for 2021/22, the impact of the pandemic will continue to be felt beyond the next school year.

5. Funding for the National Tutoring Programme should be extended in the next Comprehensive Spending Review, to establish it as a long term contributor to narrowing the attainment gap. Tutoring will play a vital role in helping education recover from the pandemic, but given the scale of the challenge, it will not be sufficient on its own, and must be accompanied by a wider investment in catch up.

6. There needs to be a renewed focus on 16-19 year olds, with eligibility for the National Tutoring Programme extended to students in post-16 education, alongside targeted funding support. Pupils beginning post-16 courses this autumn are at a critical stage in their education, and will have faced huge disruption to their learning, including the cancellation of their GCSEs. In order to help get those hardest hit back on track for A Levels, T Levels, BTECs, and for those who need GCSE passes to progress, it is vital that these students are included in targeted funding support, including a consideration of the extension of the Pupil Premium to FE.

7. Assessment for A Levels and GCSEs and other qualifications in 2021 must be as robust, respected and equitable as possible in the circumstances, with a focus on facilitating progression. While no perfect solution is possible in a context of disruption that has been significant, and unequally experienced, it is crucial that this year’s assessment system should minimise bias or unfairness. It should also be as robust as possible so as to give this years’ cohorts genuine ‘currency’ as they move to the next level. Externally set tests and robust external moderation of centre assessed grades is vital.

8. There should be a collaborative approach to the re-opening of schools, when it is safe to do so, that commands the confidence of school leaders, teachers and parents. Despite the huge efforts by schools and teachers, it is clear that nothing can replace face to face teaching and learning. If partial reopenings are considered, vulnerable and disadvantaged learners should be prioritised.

Poorer pupils struggling most in second period of schools closures, according to latest Sutton Trust research