Time for change in the classroom? Options for teacher retention, exams and the curriculum post-pandemic

This blog is part of a series looking at challenges and opportunities in education as we come out of the pandemic, based on interviews with a range of experts carried out in 2021.

Teaching and learning was forced to move outside of the classroom and into pupils’ homes twice during the pandemic, causing huge amounts of disruption to what could be taught, how it was taught, and how that learning was assessed.

But with students safely in schools again – hopefully for good – the disruption has also opened up questions on what usually happens in the classroom. Should schools be aiming for ‘business as usual’? Or is this still an opportunity to re-set? From ongoing issues like teacher recruitment, to wider potential changes to exams and the curriculum, this blog looks at what “building back better” could mean inside of the classroom.

At the core of everything that happens in schools are the teachers within them, and the consensus from our interviewees was that getting the best teachers into classrooms in disadvantaged schools is the most effective way of closing the attainment gap post pandemic.

Teacher recruitment and retention were issues before the pandemic, with previous Sutton Trust research finding that over half (58%) of headteachers in the most deprived schools were concerned about finding suitable teachers, and 85% of teachers in the poorest schools said recruitment issues were affecting the quality of education in their school.

Figure 1: Pre-pandemic, the proportion of teachers who disagree that their school (primary) or department (secondary) is currently well-staffed with suitably qualified teachers 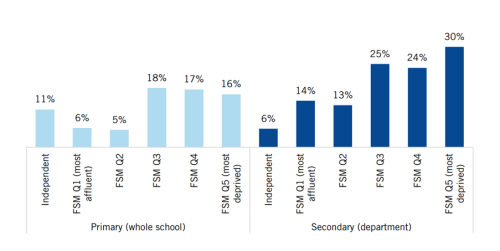 While the pandemic did see an initial improvement in teacher recruitment and retention, recruitment has since returned to normal levels, and there is early evidence retention is heading that way as well.

It’s also important to remember that during the last two years, many teachers have gone above and beyond to help their students, often working under very stressful conditions, and we haven’t yet seen the long term impact this will have on retention. The pressure has been greatest on heads, with Teacher Tapp polling towards the end of 2021 finding that 36% of heads reported sustained feelings of burnout, up from 20% pre-pandemic. The toll of this work was raised by our interviewees, with one raising the issue of burnout across society after the pandemic, including teachers, and questioning how this may impact wellbeing and retention across the profession.

There were mixed ideas from our interviewees on the best way to improve retention. One participant suggested offering teachers above average salaries to attract them to disadvantaged schools. Another suggested re-thinking the incentives offered to teachers to keep them at a deprived school (for instance, offering a pay rise), but added that this would have to be carefully implemented to prevent unintended consequences.

It should be noted that these suggestions were made before the government’s recent announcement that starting salaries for teachers would increase to £30,000 in the next two years. While this is to be welcomed, the government has also been criticised for lower pay rises for more experienced teachers, which teaching unions warned would result in a real-terms pay cut for most teachers.

Interviewees also wanted to see increased funding for continuing professional development (CPD), as well as a shift in culture, whereby senior leaders better valued CPD for their staff. One suggested that universities could play a part in expanding CPD as part of a more relaxed attitude to delivering training, which could potentially fit well with the Office for Students’ current priority to encourage universities to form closer partnerships with schools.

The Sutton Trust has recommended a focus on teachers in education recovery efforts, including an expansion of phased bursaries and increased pay to work and stay at challenging schools in deprived areas.

Exams are a central part of our education system. But students have not sat national examinations since 2019.

Many have taken this pause to question the place of exams in the system, suggesting moves to different forms of assessment – for example permanently adopting the teacher assessments used in the pandemic, or by re-introducing coursework and reducing the importance of final exams. Others have suggested the abolition of GCSEs, and moving to a ‘baccalaureate’ style system with a broader curriculum post-16.

Our interviewees recognised the limitations of exams, but broadly felt that while imperfect, they are the best option available – especially for the most disadvantaged young people. The idea of removing them from the system altogether was very unpopular among our group, with one interviewee commenting that the lack of exams in the last few years has “just highlighted that for their faults and limitations, they are the fairest measure”.  Another commented that “Exams, when done right, should be a benefit to poorer pupils, because they test what you know rather than who you are, how you talk or how you present. In theory, they are a great democratiser”. Given the challenges that teacher assessments specifically pose for the fairness of the system for disadvantaged students, previously highlighted by the Trust, a radical abolition of national examinations is unlikely to be in the best interest of students.

Interviewees suggested improvements to how students (particularly those from disadvantaged backgrounds) are supported to prepare for exams, rather than changing the exam system itself. On GCSEs, some interviewees highlighted that exams at this level are no longer the ‘leaving school’ qualification for many pupils, given so many now stay on in education. Some felt there is scope for an assessment system that runs across schools, right up until age 18, echoing a similar all-through system suggested by the 2004 government commissioned review of the assessment system. One interviewee thought that some form of simplified leaving certificate of core subjects may be a better route – rather than making students take a wider set of qualifications which, in their view, they do not need. Another expert wanted to see Maths and English studied by all students to age 18, but with a much greater emphasis on the core skills of literacy and numeracy; they felt that as currently taught, these subjects were too wide ranging, and should instead be better focused on the needs of the economy.

However, views were split on whether academic education from 16-18 should be narrow or more broad, with some support for the baccalaureate – to remove the “cliff-edge” decision point at age 16. But other interviewees were keen to keep the narrower focus from age 16, stressing the importance in preparation for any future university courses.

A few of our expects wanted to see changes in the timescales for examinations and the number of assessments taken, for example seeing AS exams, taken in Year 12, return. One stressed the importance of destinations, rather than exams, suggesting that instead of changing exams themselves, we focus on options for students who need to repeat so that they can move forward. A similar sentiment came from another interviewee, who wanted to see more attention on foundation level courses, and another making the case for reducing funding put towards higher education, and instead focusing greater levels of funding on getting all students to a baseline standard. On the post-16 transition, one expert wanted to see the removal of entry requirements for A levels and academic selection at 16, saying that admissions to sixth form is currently a “wild west”.

Our experts were also keen that lessons were learnt from the pandemic, to improve the resilience of our exam system in future. One interviewee highlighted the strength of digital assessments, with greater ability to withstand shocks like a pandemic, saying that “many other countries have done this for high-stake assessments, we are way behind the curve on this.” They were also concerned much of the media’s attention on assessments during the pandemic had been on GCSEs and A levels, but cautioned there was also a need to consider the resilience of assessments for technical qualifications too. Another highlighted that a re-introduction of AS exams could have helped with assessment resilience at A level, giving some information on students’ attainment at this stage, in the absence of final A2 exams.

Re-assessment of the overall system also included views from our interviewees on potential changes to the curriculum. There were many comments from our experts questioning whether the current curriculum is fit for purpose. Some felt the balance between 21st century skills and knowledge was not yet correct, an issue which has been the subject of heated debate for over a decade.

Some interviewees were concerned that children were taught what is needed to do well in an exam, but not what is useful to succeed in life, which they felt negatively impacts disadvantaged pupils particularly. One interviewee was keen to see non-academic subjects and qualifications becoming more of a focus of the curriculum. Another cautioned that our narrow focus on knowledge can mean students miss the real purpose of a subject – especially for more creative subjects. Interviewees commented that they felt the UK is potentially behind other countries on these issues, and that we should widen our curriculum to not have a narrow academic focus.

Concerns were also raised on how well the current curriculum was serving the needs of businesses, with an interviewee commenting that “we are not listening enough to businesses to identify the skills that are needed in the next generation. This mismatch was an issue before the pandemic, we need to be better at preparing pupils for the world of work”.

Some interviewees wanted to see better consistency in the curriculum across the country, with one suggesting a new set of universal curriculum textbooks for schools to follow. One interviewee suggested that introducing vocational topics into the curriculum at an earlier stage could be a good way of changing the mindset around and increase take-up of further education, whilst another thought this could lead to young people entering employment sooner rather than spending prolonged time at college.

One point raised by two interviewees was related to the growth of online and blended learning; they thought that learning at home could allow students to learn a broader range of topics and create more flexibility in the curriculum (with students able to learn about topics they are most interested in outside of the classroom).

Changes in the classroom

Overall, our interviewees were keen for the education system to take this moment to re-think what had been standard before the pandemic, and where possible make changes for the better. However, with exams especially, that desire also came with caution – that systems should not be altered without full consideration of the consequences of any change, especially for the most disadvantaged students. Any changes must also take into account the capacity of schools and teachers, after what has been an extended period of crisis.

For more information, see our introductory blog, where you will also find links to the whole series.