Moving Up the Great Gatsby Curve

How do you slide down the Great Gatsby Curve? This is the question posed by the Canadian economist, Miles Corak in his latest paper on a simple but powerful graph that has attracted much attention on the other side of the Pond. The graph encapsulates arguably the biggest social challenge facing highly developed countries in the early 21st century: how to safeguard social mobility in a world of increasing income gaps between rich and poor.

The christening of the Great Gatsby Curve almost exactly a year ago was itself a minor miracle. Here was a senior US Government adviser conceding publicly that the American dream is little more than a myth for many citizens. Alan Krueger, the chairman of the Council of Economic Advisers (Obama’s in-house economic think tank) named the graph after the novel by F Scott Fitzgerald. The Great Gatsby is one of the great works of American literature capturing a time of excess during the 1920′s. The rise and fall of the book’s central character, the enigmatic millionaire, Jay Gatsby, has become a cautionary tale about the American Dream.

For the Roaring Twenties read the great divides of the early 21st century. After the post war boom in social mobility, the gaps between rich and poor in the US and UK have widened to pre-war levels. The implication of the Great Gatsby Curve is that today’s excesses will make it much harder for future generations to fulfil the American dream: success in life will only be available for those with the support and connections that come with a privileged upbringing. Sadly, the same can also be said for the UK.

The graph (below) compares two statistics for a number of rich nations. On the horizontal axis is the official Gini coefficient, which measures the level of income inequality at a point in time in a country. The higher the Gini coefficient, the bigger the income gap between the richest and poorest in society. On the vertical axis is what is termed ‘generational earnings elasticity’. This measure signals how sticky or immobile a society is comparing one generation with the previous one. It tells us how much a father’s earnings predicts the earnings of their offspring. The higher this number, the lower is social mobility. 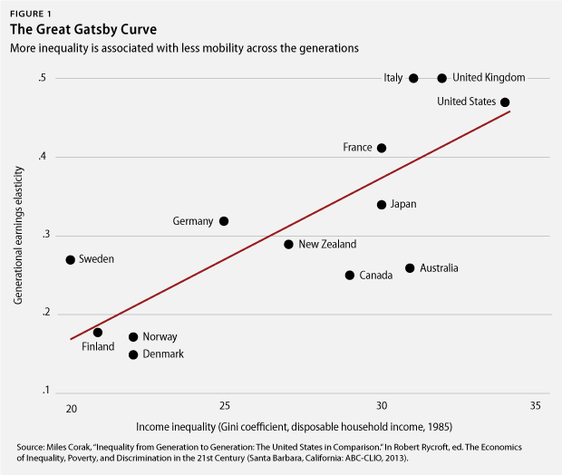 As you can see the Curve shows that more unequal societies are less mobile. Put simply, when the rungs of the income ladder are wide, the chances of climbing the ladder are lower. The UK and US are particularly unequal and immobile. To put current US mobility levels into perspective Krueger uses a clever comparison of the correlation between parents’ height and their children’s height. “The chance of a person who was born to a family in the bottom 10 percent of the income distribution rising to the top 10 percent as an adult is about the same as the chance that a dad who is 5’6” tall having a son who grows up to be over 6’1” tall. It happens, but not often.”

More ominously, as the UK and US are more unequal now than they were a generation ago, the Curve suggests less mobility for future generations.

When Corak presented an earlier version of his paper during the Sutton Trust-Carnegie summit on social mobility last year, he was careful to stress that the Curve does not chart a causal relationship.  If it was that simple, then improving mobility would be a straightforward task of raising taxes to reduce income gaps. Each point on the Curve however is a product of a complex series of interacting influences over the lifetimes of children and adults.

How life chances are created in each country can be broken down in terms of three main underlying factors. These are: family influences (including genetic, environmental and cultural factors); public policies (how education, health, and welfare systems benefit people from advantaged and disadvantaged backgrounds); and wage differentials in the workplace. The problem for the UK and US is that in each of these areas, we compare poorly to other countries in the mobility stakes. A private tuition and coaching industry has mushroomed to exploit the resources now devoted in homes to secure children’s futures. The best schools and teachers disproportionately benefit the well-off. And the wage premiums for the highly educated are accelerating away from those of the uneducated. And so one generation’s privilege is bequeathed to the next.

Given this backdrop, I’m afraid my question is a more pessimistic one than that posed by Corak. How does the UK and US find ways to stop moving up the Great Gatsby Curve?

Can Liz Truss’ government deliver a lasting legacy for the next generation?

We look at some of the challenges the new Prime Minister faces.

Our advice on how students can best navigate A-level results day this year.