Carl Cullinane on the lessons from the fourth Chain Effects report on academies.

Today sees the publication of the Sutton Trust’s fourth Chain Effects report, a series which has documented the progress of the sponsored academies programme in English secondary schools since 2014. When David Blunkett announced the establishment of then ‘city academies’ in the year 2000, the programme promised transformational change for the prospects of the worst performing schools in the country, and an opportunity for the often deprived pupils who attended them to break the cycle of educational disadvantage. Fifteen years since the first academies opened, we continue to see a very mixed picture in terms of the scheme’s original remit.

Much has changed since the publication of our first report: 4,000 academies have become 6,000, chains have grown and expanded, and the yardsticks by which school success is measured have changed. Yet Chain Effects 2017 reports a picture not all that different from our first report, with some notable individual exceptions. Sponsored academies in chains do reasonably well for some students and not others, and the picture is largely marked by substantial variation in fortunes between chains. The sponsored academies covered in our report mostly continue to educate numbers of disadvantaged pupils substantially above the norm, with some chains catering to more than double the average for mainstream schools (27%). While fewer than a quarter of chains show higher GCSE attainment for their disadvantaged pupils than the mainstream average, the picture for pupil progress between Key Stage 2 and 4 is more positive. As figure 1 shows, disadvantaged pupils make slightly more progress at GCSE level in the group under analysis compared to the national average. 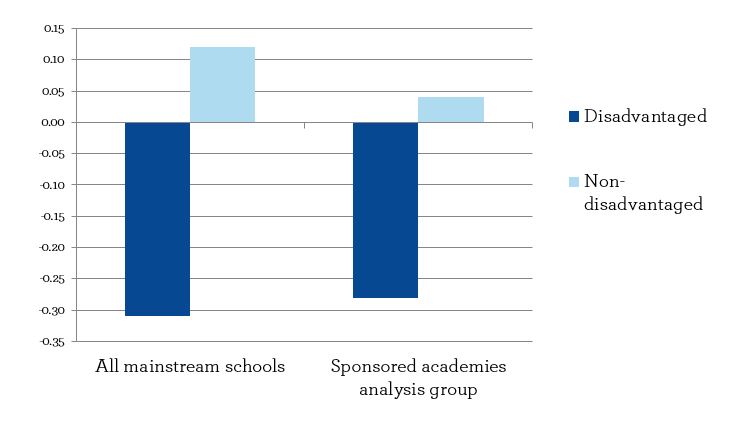 Figure 1. Progress 8 scores, 2016, by disadvantaged status (0 is the average for all pupils)

This year, for the first time, we are able to drill down further within the disadvantaged pupils in sponsored academies. The most important factor for GCSE attainment is prior attainment at the end of Key Stage 2 in primary school. What this year’s report finds is that sponsored academies do encouragingly well for their disadvantaged pupils with low prior attainment (better than the mainstream average). Given that the schools in our analysis group cater to disproportionately high numbers of such pupils, it is undoubtedly good news, and an impressive accomplishment, that schools are helping to improve the achievement of such a particularly deprived group. 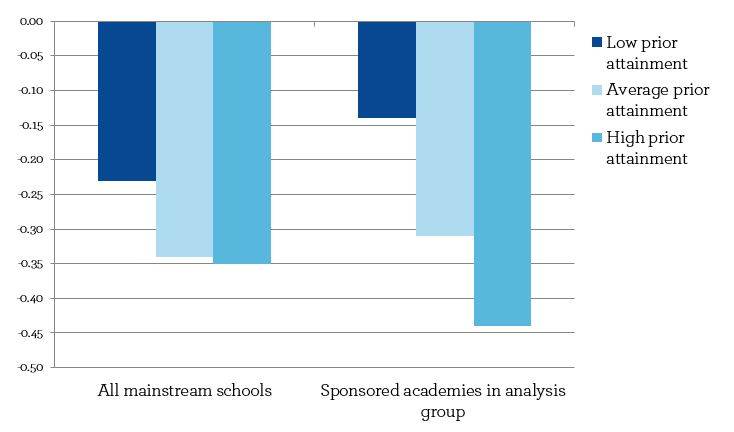 Figure 2. Progress 8 scores of disadvantage pupils, 2016, by prior attainment groups

However, as figure 2 demonstrates, these schools are not doing so well for their pupils with previous high attainment, indicating that there remains room to ‘stretch’ these students further and prevent the phenomenon of wasted talent the Sutton Trust has highlighted extensively. Academy chains need to do more to support the fulfilment of this potential. The new school accountability measures of Progress 8 and Attainment 8 mean that the scores of all children matter in measuring of school performance, and no longer just those either side of the C grade threshold. It remains to be seen whether this change leads to different behaviour.

As our previous reports have shown, there is wide variation in the fortunes of schools in different chains. While there are a handful of chains delivering excellent outcomes for their pupils, substantially outstripping the averages above, there continue to be many chains who perform very poorly. When ranked on a composite index combining multiple performance measures, this year’s report shows that just ten of the 48 chains we looked at exceeded the mainstream average. Of the 29 below the average, 15 of them have been in this group for three consecutive years, indicating persistent under-performance. 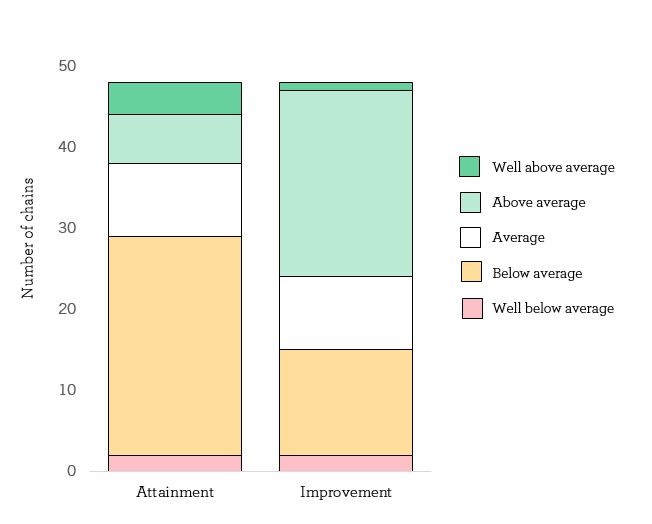 While, on the whole, attainment in our analysis group schools is relatively poor compared to other schools, this is should not be surprising, as the intention of the sponsored academies programme is to take over some of the most challenging schools in the country. More encouragingly, the improvement in scores between 2014 and 2016 is actually above the average for all mainstream schools. Over half of the chains have improved more than the average school in that time period, including both low and high performers. This is evidence that chains are turning around the fortunes of schools, and pupils. Nonetheless, it remains a mixed picture, with ten chains falling clearly below average for both attainment and improvement, indicating that the remit of school improvement is just not happening. This is particularly the case when several of these chains have been in this position over multiple years of our reports. The country’s most disadvantaged children deserve better, and our high performing chains have shown that this is possible.

Chain Effects 2017 once again shows that much work remains to be done in harnessing the expertise of multi-academy trust sponsors to transform the fortunes of England’s most deprived schools. While there are some positive indications, and the success of some of the chains outlined in the full report should be used as an exemplar for others, much more needs to be done to make sponsored academies the driver for social and educational change they were hoped to be.

The opening of applications for our 26th University Summer School cohort

A breakdown of our UK Summer Schools offering for 2023.