“I feel that the system is broken. It doesn’t work for families like mine where one parent is in higher education.” 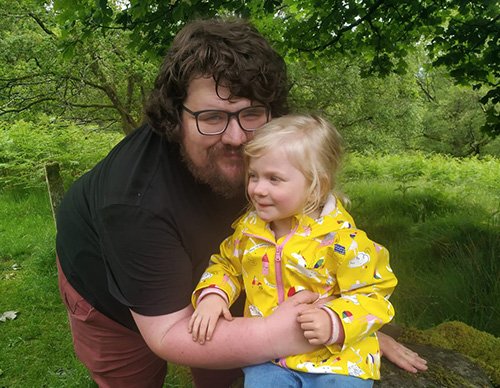 Michael Howe, 30, lives near Lincoln with his partner Danielle, 28, and their 3-year-old daughter, Lily.

Michael is a first-year student studying pharmacy at the University of Lincoln and Danielle is a self-employed cleaner who cares for Michael’s ill father.

The family don’t qualify for 30 hours childcare because the system doesn’t cover parents who are studying.

Michael said: “Lily is autistic and since she started nursery she has come on in leaps and bounds. She’s become more confident with other children, more verbal and the staff have been teaching her Makaton to help with her communication.

“The last lockdown was really difficult for us all. Lily was struggling and it showed us how vital the support, learning and routine of nursery is to her development.”

Lily receives 15 hours of free childcare a week, with the family paying for an additional 10 hours a week themselves so that she can benefit from the socialisation and the learning and development that nursery brings.

They also pay a ‘top-up fee’ of £1 per hour on the 15 free hours they receive each week to help the nursery cover its costs.

Michael said: “I feel that the system is broken. It doesn’t work for families like mine where one parent is in higher education. The only way to access the extra hours would be for me to do a full-time job on top of university, which would be impossible.

“My partner would really like to work more hours, but until Lily receives more childcare we’re stuck. This unequal access to 30 hours is unfair to many families and just widens the attainment gap. It needs to be a fair system which is funded properly so the children who need it can benefit.”