“I’m so thankful that I live in Camden as I honestly don’t know what I would’ve done if Louie could only access 15 hours. The extra hours have been a lifeline.” 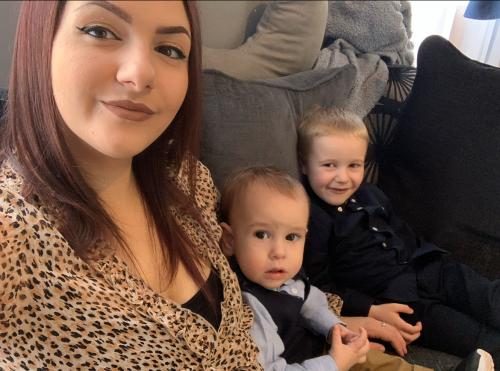 Eliza with Louie and Logan

Eliza Teles, 26, has two sons, Louie, almost four and Logan who is 1. Eliza is a full-time mum and is only eligible for 15 hours of funded childcare a week.

Thanks to a council-run scheme in Camden where they live, Eliza can access 30 hours funded childcare for Louie. This gives her time to attend hospital visits with Logan who has severe allergies.

Eliza said: “Louie attends Thomas Coram nursery in Camden and it’s been a lifesaver for me. Louie is due to have an assessment as we think he’s possibly got ADHD or dyspraxia. He can get very anxious, doesn’t like a lot of noise and doesn’t like being alone. The staff at the nursery have worked hard to get him to come out of his shell.

“Louie started attending when he was two and over that time, I’ve seen him really develop. Before he would never play, he’d just make a mess. Now he’ll play with toys and sit down and draw a picture. I’ve seen his concentration get a lot better and he’s made friends.

“The nursery does music therapy with Louie, which helps him control his emotions. He also doesn’t need to wear his ear defenders at nursery. Nursery has given Louie the opportunity to find out who he is and develop his own personality.

“Life is complicated because my younger son, Logan, has severe allergies to all sorts of things, including pollen. This means simply going for a walk in the park is difficult.

“With Louie enjoying his extra hours at nursery, this gives me chance to take Logan to his doctors’ appointments at Great Ormond Street. Without the extra hours, I wouldn’t be able to make the appointments as it would be a challenge taking Louie there as well.

“We live in a small flat and I think nursery is a helpful escape for Louie where he can be himself and enjoy the space.

“I thought that all families got access to 30 hours childcare when their child reaches the age of 3. I didn’t know that we wouldn’t be eligible. I’m so thankful that I live in Camden as I honestly don’t know what I would’ve done if Louie could only access 15 hours. The extra hours have been a lifeline.”