“I assumed that every child got 30 hours when they turned three, so it was a shock to learn that she wouldn’t be eligible because I’m a student.” 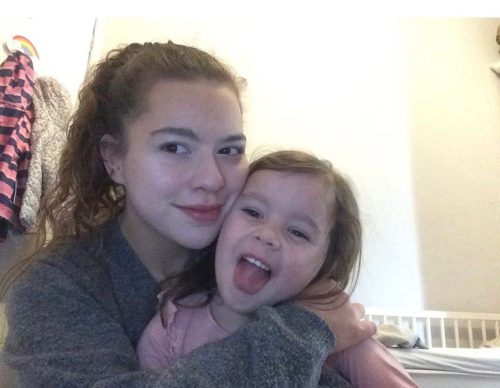 They were only eligible for 15 hours of funded childcare, but a council-run scheme is giving them additional hours allowing Chloe to study for a degree.

Chloe said: “Ava started nursery when she was two and a half and did 15 hours on a funded scheme. I assumed that every child got 30 hours when they turned three, so it was a shock to learn that she wouldn’t be eligible.

“I got the opportunity to apply for Camden Council’s ‘Camden Enhanced Offer’. It means that Ava can benefit from an extra 15 hours of nursery a week, meaning she’s there for 30 hours and attends for school hours every day.

“Without this scheme, I wouldn’t quality for the 30 hours entitlement as I’m a student. I’m two years into studying a criminology and psychology degree with the Open University, I hope to use my degree for a support role in the police force.

“It was especially difficult because I’m being assessed for ADHA, so it takes me a bit longer to work through my studies.

“Most of all Ava has benefitted from the social elements of nursery. She loves it. Before nursery she was quite scared of other children, but now she’s so sociable. She has little best friends and I’ve seen her blossom and be much more confident.

“Nursery has taught Ava how to spell her name and she knows all her letters and numbers. She comes up with words and phrases she got from nursery, she’s picking things up all the time just from being around other people.

“I was surprised to find out that Camden is one of only a few places offering extra hours to people like me. The extra hours are setting Ava up for starting school in September and having the routine and habit of getting up every morning and getting ready.

“That year leading up to starting school is really important. I think if Ava was still on 15 hours, I think she would struggle with that transition. I’m not sure how she would’ve coped. Nursery are also going to take her to visit the school nearer the time, so it’ll be a natural transition.

“Whether you want to start work or even just for your child’s benefit, nursery is so important. It’s not fair that some children can get 30 hours and others can’t.”