Lee Elliot Major: ‘I hope my story shows what can be achieved’ 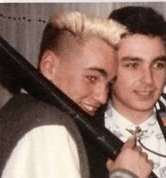 Close friends say that, given half a chance, I do like to talk about myself. And so it proved again last month when I had the pleasure of speaking to students on Sutton Trust summer programmes, which give them a taste of life at one of the UK’s prestigious universities.

These talented teenagers came from all manner of backgrounds: they were on free school meals, in social care, from deprived communities or the first in their families to go to university. Yet they were all visibly shocked when I told them my own story and why the work of the Sutton Trust means so much to me.

I was chucked out of my home when I was 15 years old after a parental break-up. I didn’t talk to my father for a decade. Just when I needed to focus on my A-levels, I gave up school altogether. I worked as a petrol station attendant and made the local news when I was threatened with a knife by a balaclava-clad robber. I even worked weekends as a street cleaner (surely qualifying me as white trash). And yet I did end up going to university. In fact, I gained not one but three degrees.

The truth is that I’ve only recently become completely comfortable in talking frankly about my early days. Until now, I’ve tended to joke about it in that very British self-deprecating way – anything to avoid the embarrassment of actually revealing one’s innermost feelings to the world. Whenever I’ve mentioned my working-class credentials, I’ve slipped into Python-esque cliché: “We used to ’ave to get up out of t’shoebox at 12 o’clock at night and lick t’road clean wit’ tongue.”

But something has changed since I’ve become chief executive of the Sutton Trust for one thing, my boss, Sir Peter Lampl, has encouraged me to be more forthcoming. After all, our mission is to improve social mobility through education. But I’ve always related to the thousands of young people we support each year. Many face exactly the same anxieties and challenges as I did three decades ago. But I’ve had a bit of an epiphany of late: perhaps being open about my own life might provide a few helpful lessons to others.

I grew up in Feltham, a suburb of south-west London whose main claim to fame in the 1980s was its prison for young offenders – that, and marauding gangs of skinheads. I can’t tell you how utterly devoid of aspiration and hope that world seemed to me. No one I knew ever mentioned university. My mum had married my dad when she was pregnant at 17. Higher education had simply not been an option for my family.

My life so nearly ended up repeating this historical precedent. But I learned the power of persistence, becoming a regular in the painfully slow queues at the local social security office. First, I needed a place to live, then I had to convince the local authority to support me to go to university. It would be unthinkable now, but children not in contact with their parental guardian did not qualify for maintenance grants then. I remember asking with a growing sense of injustice: “Why should I be penalised because of the family I happen to come from?”

We now know that my generation faced lower social mobility than the generations before us. Too often, who you were born to determined whether you made it in life rather than your own talent and hard work.

Today’s non-privileged millennials are, if anything, growing up in an even stickier environment. They, too, are making their way in life after a major recession. But inequality has widened immeasurably – so much so that politicians from all sides now agree that it is undermining social mobility. White working- class boys like me have become an endangered species on university campuses. A degree is no longer a passport to a good career: you need connections, work experience, internships; then, just maybe, you can get your foot on the career ladder.

Push to the top

Helping high-attaining students from state schools to fulfil their academic potential is, of course, not the only social mobility challenge – and certainly not the only focus for the trust. But as long as our ruling elites come from a small, privileged class, we have to ask what it is that enables some young people to buck the trend and succeed in life despite their circumstances.

Most put it down to a combination of hard work, talent and luck. When I look back, I think of the generosity and inspiration of people who helped me when I needed it most: the teacher who saw something in me; the family who took me in and gave me a home; the friend who persuaded me to go back to college; the uncle who paid for me to go to university.

My advice for today’s young people is to introduce themselves to anyone who might be able to help them. If I had my time again, I would be unashamedly pushy. People can only say no. And there are so many who are waiting to be asked.

An important lesson I learned is not to prejudge what others will think of you. When I turned up to my Cambridge interview, I must have been a shocking spectacle for the dons: bleach- blond “psychobilly” hair, several large earrings, eyeliner (it was the 1980s) and a black eye. It was an alien environment to me, and I must have looked like someone from another planet.

To their eternal credit (this was before university access became such a high-profile issue), the tutors did their utmost to identify any academic potential I might have had. They went out of their way to give me every chance. Within months, however, I had dropped out of school. I went on to retake my A-levels and study at Sheffield University and Imperial College London.

‘Have a go’ confidence

If I could do one thing, I would rid disadvantaged young people of their “not for the likes of me” and “I’m not good enough” attitudes, and replace them with the “have a go” confidence that people from privileged backgrounds seem so naturally to acquire. Attitude, just as much as grades, makes people. As that great football philosopher Terry Venables has remarked: in life, the very worst regret you can have when you’re older is not failing at something, but not trying in the first place – and never knowing what might have been.

Dare I say it, we could learn a few things from our American friends. I still have days when I suffer from bouts of “imposter syndrome”. “Fake it ’til you make it,” one of the students on our US programme advised me. He’s off from Dagenham to Prince- ton this month and already his fellow Princetonians have drummed into him their confidence-boosting tricks.

The irony of the ever-escalating education arms race is that life skills – our non-academic attributes – have become even more advantageous. Of course, GCSE and A-level grades matter. But we all know the things that make the difference in the real world: how good you are with people, how much you can learn on the job, how far you can stick at something. Looking back, I realise now that my background prepared me well for life’s future challenges. I wouldn’t change it for the world.

Lee Elliot Major is chief executive of the Sutton Trust

Improving social mobility in the workplace

Our partners PwC share how they're making their organisation more socio-economically diverse.

Moving in the right direction: Social mobility and university access

Our CEO James Turner discusses what we can learn from our new social mobility rankings.

A Fair Start? A practical way of levelling up